Normally you’re only reading about a layaway program during the holiday season. 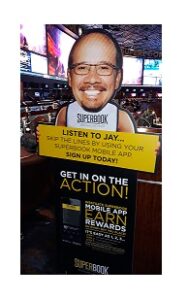 However, heading into this Sunday, the Super Bowl wagering menu stumbled upon a successful (so far anyway) technique for locking in some early wagers for the “Big Game”!

Okay, so maybe not WallStreetBets type rewards but still enough of an effort (a combined unit total of +4166) to be in a rather good spot still four days out from kickoff.

We’ve had a nice run the last 3 weeks on Sports Betting Weekly. That’s probably the best part about doing the show live on WWSRN, having video evidence of the winners. Plus, we’re not only hitting some of our #LiveAction bets but cashing them before the show even ends. This year’s 7th Annual “AFC/NFC Bet Away Weekend” trip to the Westgate for a visit with Jay Kornegay’s crew at the Superbook was another Pandemic cancellation.

It all started last Sunday night. 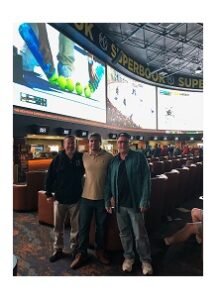 Normally, in a 14-point win, a field goal with 54 seconds left in the game isn’t a big play. Unless you bet Team Totals. Right after the Bills season came to an end, the Aztecs were about to tip off H2 as one of the late West Coast games so rather than placing the last straight bet of what was a long day of wagering, SDSU got added to a parlay. The only other lines out on JoinJazzSports.com were for the NCAAB Games on Monday and the early lines for Super Bowl LV.

Betting H1 or H2 is usually easier than wagering on the entire game and you can win twice as many bets. Virginia, technically still the reigning NCAA champion, was playing Monday so that side was added. Since no other game was jumping off the board, we added the 3rd leg to the parlay from the early lines on the Super Bowl with the OV 56.5. (+600)

The Tickets Started Piling Up! 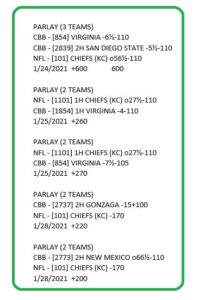 Monday the first half lines opened up and since those UVA Cavs were on a ticket for the Game, they were added to a play with OV 27.5 H1 of the Chiefs/Bucs game. (+260) There were now tickets with both the H1 and Game OVERS were covered. (Editor’s Note: All the plays will eventually only include the Chiefs and the OVs) The Game line had gone up a point, but they were already in the 3-teamer so why not add a 2-teamer of their own on the Game and another H1 OV 27.5 play. (+270)

Our “No Football This Weekend” show (available on the BellyUpPodcastNetwork) last Thursday night included a little bankroll bump when we hit live plays from both GMFSportsConsultants and 151SportsInvesting. Nothing better than ending the show with more money than you started. A few minutes after signing, off the Covers scoreboard showed Gonzaga hadn’t covered H1 again. Seemed like playing them again made sense. (They had cashed H2 the Thursday before as well)

This time added to the Chief ML for the Game. (+220) That was the first action on the side for this year’s NFL championship game and would be the beginning of an 8-pack of plays that would include a leg with KC! While in the NM/Fresno game, they had combined for only 38 points in H1 so that H2 OV joined a KC H1 ML play (+200) so now both parts of the game were covered with Chiefs ML action.

Fridays are always busy getting the shows and podcasts edited for posting everywhere. 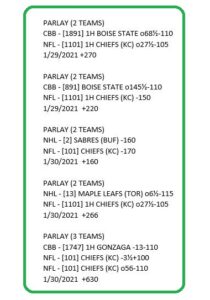 Most weeks the only handicapping that day involves looking for games to hop in real time but the Boise State game was a late start allowing for a little pre-game capping and the OV looked good so H1 was coupled with another H1 OV play for the big game. (+270 ) The BSU Game OV got placed on a ticket with another KC H1 ML play. (+220) This little journey had now become more than just dabbling on the KC ML. Part of playing the ML side is knowing that the Chiefs haven’t covered all that much in the last two months. That 3.5 looks a lot bigger than 3.5 normally does.

Right about now this is becoming fun and an enjoyable little game. After every new play that stayed live to that Sunday, Charles would get a text of the screenshot with a quick note. The fact that he’s currently in Brazil probably caused him some middle of the night cell phone activity.

Saturday morning’s tickets were 100% a result of #BlackHawkWes. You won’t normally see a Sabres Game ML tied to KC Game ML (+160) on this computer. That goes the same for the OV in the Toronto game later that night which fixed to more H1 OV action. (+266) However, these were 2 of the EASIEST wins so far and another reason you’ll hear this on the DC’s show with Dan, Chris and Mikey; “You don’t have to be a great handicapper in every sport. You just need to know someone that is.” Check us out Saturday’s at 9:30pm ET!

This past Saturday Dan actually ran solo on BellyUpFantasy and he was great as always. Thanks to T-Mobile there was still action to be had while attending a small socially distanced engagement party for a good friend. Strong starts from another Gonzaga ticket involving H1 and the Chiefs giving 3.5 with the OV (now down to 56) a 3-Teamer worth +630 and the biggest number on any of the plays in this Super Bowl Layover game. SDSU also played well and their H1 was put together with H1 OV 27.5 (+270) Ironically that number on the early Total hadn’t moved in line with that for the Game.

The last 3 plays all came during the rest of the weekend. 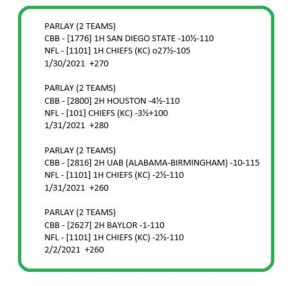 Understand that H2 plays don’t always go this well. You can also have a DD favorite at home down by 4 at the break, giving 7 or 8 for H2 and they end up losing the game by those same DDs. These plays were all straight bets as well. There’s another “Commandment” if you have it in a parlay, you’d better have it straight too!

So, you take what you can get. That’s a decent portfolio of plays as layover selections go!

The total is 14 plays. A couple 3-teamers with the rest all involving two teams. The average payoff is +298 per ticket. They have a combined odds value of +4166.

Just like that old saying goes, really does beat a stick in the eye. Hopefully, next week we’ll be talking about Back-to-Back Super Bowl Championships and discussing what a high scoring affair it was.

Then it’ll be Christmas in February.